Home > In The Media > Movie Review of 'Avalanche Alley' 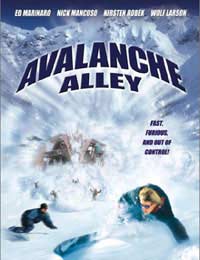 Ski area owner Rick (Ed Marinaro), desperately seeks to save his resort from bankruptcy when his wife, Lauren, and apparently the mountain’s only ski patroller, Alex, are buried in an avalanche that threatens the resort. Search and Rescue are unreachable and only an inexperienced city boy can save the day.

The film impresses with ski patroller Alex’s, played by Wolf Larson, accurate snow pit, but for those of us who’ve ever been at a ski resort in the winter it begs the question: Why didn’t they do avalanche control throughout the season? Of course, with only one ski patroller, there probably just wasn’t enough time. If we suspend disbelief, ignoring the horribly inconsistent weather and mismatched mountain scenery, and simply enjoy the avalanche as a plot device, weak character emotions and an unclear motive for a pointless lie remain.

Though the actual acting is not bad, it never becomes clear why the ex-Olympic coach turned resort manager Scott, Nick Mancuso, became a useless drunkard. In addition, his lie, which takes up most of the interactions between Scott and Rick, feels cursory. Filling Rick, his ex-athlete and current boss, with insecurities about Lauren’s loyalties because she’s been given his job, is weak in the face of five people buried in an avalanche that threatens the whole resort. If we knew more of his history it could work, but the incomplete character development undermines the plot. Every movie needs a human villain, but this villain without a back-story leaves the viewers unconvinced and confused.

As usual, the young punk snowboarders make the movie. Their cool attitude contributes to the plot, is the lesson and the most convincing part of the movie. The “extreme” snowboarding death brigade also lacks a back-story, like who the city kid with the camera is, and why they take him up the mountain to film, when he can’t ride down. However, the simplicity of the characters and their actions are believable. It is easy to understand a goal-oriented motivation, and live-on-the-edge cockiness believably begets stupidity.

The riding actually fits in the plot line and aligns with the characters and context believably, as opposed to other ski movie’s directorial Warren Miller moments. And their burials seems realistic. While the snow cover is a bit unrealistic, powder after an avalanche and no end zone deposit, Kirsten Robek as Lauren convincingly digs at the ice until her fingers bleed and portrays panic well.

The discovery of Tami’s dead body, Miranda Firgon, gives the movie depth. And the psychology of Jake, Kirby Morrow, adds a comedic break and insight into someone facing death. Though, the inconsistent weather becomes problematic when Jake is being snowed on, while Alex is crawling in the sun at the same time in the same chute, and the extended length of Simon’s, Tobias Mehler, decent to get help adds to the mountain layout confusion beyond us being lost with him. Unfortunately, the confusion detracts from the tension and slows the movie.

In an attempt to imitate big storm disaster movies on a small scale, the movie takes on multiple story lines without completely developing any. Nevertheless, the end of the movie vindicates all smart winter sport athletes and doesn’t let any of the characters off the hook. Part life-sucks, part everyone gets their comeuppance, the ending validates the rest of the movie.