Home > Competing > How to Become the Next Skiing Champion 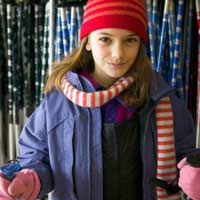 Dreaming of becoming the next Bode Miller or Glen Plake? It only takes dedication many hours on the mountain and placing at the top of a few Extreme or World Cup competitions.

The Fédération Internationale de Ski, abbreviated in all languages as FIS, presides over all Olympic ski disciplines. Each country has its own governing body for Olympic qualifying ski events and membership is open to anyone. Ruling over alpine skiing, snowboarding, cross-country, Nordic jumping, disabled and freestyle disciplines each organization sponsors regional events and FIS sanctioned races.

Racers train to become national ski team members by attending ski academies or training with ski resort sponsored racing clubs. All racers must be national ski organization members, and compete regionally by age group. Top finishers in each division advance to national championships such as the FIS Junior World Championships, Europa Cup, Nor Am Cup, USA Alpine World Cup, FIS World Cup and the biannual FIS Alpine Ski World Championships. Invitations to various levels of the national ski teams, development teams and A and B teams, are given at the coaches discretion to competitors who finish top seat at a number of championship races and accumulate the most points. Top ski team members get to compete at the Olympic Winter Games, but the internationally recognized best men’s and women’s skiers accumulate the most points overall at the annual World Cup events.

American high schools located near ski areas often have ski teams that race against other regional high schools for state titles. Additionally, individual racers can be USSA members (the US’s national ski organization) and race at USSA and FIS sanctioned events to receive world rankings and US Ski Team invitations. However, because the schools focus on standard state academics, racers do not have much time on the hill, and coaching staff is limited, thus students have to work much harder to be viable competitors.

For some of us, the Olympics are just a gate dream, but freeskiing holds promise. In 1996, the International Free Skiers Association (IFSA) North American Division was established to govern the sport of competitive freeskiing, followed two years later by the European Division. Freeskiing includes all alternative aspects of alpine sports, skiing and snowboarding, including off-piste freeriding, skiercross and slopestyle—terrain parks, and half pipes. Adult and junior Extreme Freeskiing competitors race off-piste and are judged in five categories. Line Choice, the difficulty of decent based on steepness, exposure, air, snow and course conditions; Aggressiveness/Attack demonstrating energy in the descent of their chosen line.

Form and Technique describe the racer’s style and turn quality, and Fluidity is the competitor’s ability to descend their line with continuity, pace and smooth transitions without stopping or falling. Finally, all competitors must maintain Control throughout their run. The US Freeskiing Series, Freeskiing Would Tour and other localized events are open to anyone, however as of yet, there is no final event to determine the best of the best.

For the rest of us weekend racers, we can join our local mountain’s ski club or various training camps. Many ski schools, from Treble Cone Race Academy in Wanakam, New Zealand to the Club de ski Camp Fortune Ski Club, in Canada, offer week or month long clinics specifically for gate or big mountain training.

Perhaps someday we too will be noticed for our moves on the mountain and asked to join the team. Racing gates or hucking cliffs in a nationally or internationally recognized competition can add a thrill to a day on the slopes, validating your abilities and hopefully put a trophy in the case.