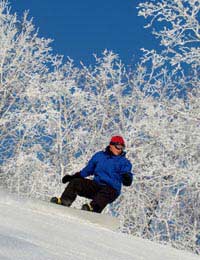 Snowboard construction has come a long way from the days of the plywood Snurfer. During the ‘70s and ‘80s passionate riders like Tim Burton and Tom Sims poured much time, money and effort into developing snowboard technology and increase their performance, which gave rise to the snowboards we ride today.

The most notable improvement in snowboard manufacture is the reduction of weight. Even boards made just 10 years ago are considerably heavier than the boards of today. Materials such as carbon fibre and fibre glass greatly aided the improvement of designs. Nowadays, almost all snowboards on the market are durable, light weight and stylish.

Another major change is the advent of “twin tips”. Previously, a snowboard had a distinct nose and tail and could only be ridden in one direction. The twin tip design allows the snowboarder to ride forwards (regular) or backwards (switch of fakie) as the nose and tail are essentially identical.

There are now many different snowboard manufactures in Europe, North America and Asia. Though they may look simple, snowboards are actually quite complex, and there are a number of components that make up any one deck:Boards are normally made one stage at a time by hand with the help of machinery such as a press.

In the recent environmental movement, certain snowboard manufacturers have moved to using more sustainable materials for board construction. For example the brand Arbor uses wood such as bamboo, koa and eucalyptus for its top sheets.

There have also been some other quirky developments such as piezoelectric damper and vibration dampening “slime walls” - a urethane sidewall reputed to improve performance on rails.

Though the main components of all snowboards are essentially the same, it’s subtle differences in materials that make boards different. Low end snowboards tend to be heavier and more flexible, where as the most expensive boards are very light weight and tend to be stiffer.

Construction also varies for each discipline. Shorter more flexible boards are favored by freestyle snowboarders, whereas long, narrow shapes suit carvers. Most recreational snowboarders opt for an “all mountain” freeride board, which are long and stiff enough to handle powder and piste conditions, but will also allow riders to perform in the terrain park and half pipe.