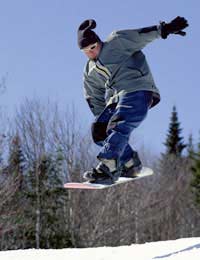 Like other winter sports snowboarding is associated with certain risks. Due to the nature of travelling at high speeds down slopes with many other skiers and snowboarders around, there is a risk of collision. Therefore, all slope users should follow a set of rules designed to reduce the likely hood of an accident.

Often, snowboarders will take on an obstacle which is beyond their technical ability and this can lead to injuries. Terrain parks normally mark their obstacles according to size and difficulty. Beginners should first become comfortable with the easier features before attempting more advanced lines.

The use of helmets whilst snowboarding has become more and more common and is especially popular in North America, though Europe is following slowly. Some resorts have made it compulsory to wear helmets in terrain parks, in a bid to reduce head injuries.

Snowboarding off piste presents a whole set of new hazards that are not found within ski resort boundaries. Outside of the resort limits there are no marked runs and no ski patrol. As a result, there are many more dangers facing snowboarders, such as avalanches, crevasses, unmarked streams and rocks. There is also a risk that a small injury can become life threatening in off piste areas, as a snowboarder may not be able to move to get help, and therefore could die from exposure.

Off piste and backcountry snowboarding requires in-depth knowledge of the local terrain and a good understanding of avalanches and how to avoid them. Avalanche equipment such as an avalanche transceiver, probe and shovel should be carried at all times when outside of ski resort boundaries.

Snowboarding need not lead to injuries; if you wear adequate protection, follow slope etiquette and don’t push yourself too far beyond your ability level, you can minimise the risk of damaging yourself, or anyone else.