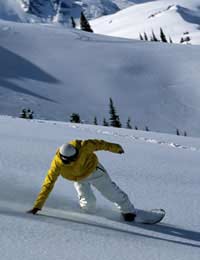 As the ski industry is completely reliant on cold weather global warming is a worrying threat to the future of snow sports. There is now no doubt in the minds of the educated that the recent rises in average global temperature are due to man’s actions.

Burning huge amounts of fossil fuels for energy has pumped unnaturally large amounts of green house gases into the atmosphere with effect of warming of the planet.

It is now almost impossible to open a newspaper without seeing at least one article describing the effects of global warming. Thinning ice caps, retreating glaciers, species of plants and animals declining as their habitat gets too hot for their survival.

Skiers and snowboarders are some of the first people to witness global warming first hand. Shorter winters, rising snowlines and disappearing glaciers are worrying signs that things are heating up, and if not stopped, the ski industry is likely to eventually face destruction.

The irony that faces winter sports fans, is that in our very desire to enjoy snow sports, we are contributing to the destruction of the mountains environment that we know and love. Just by travelling to a ski area we must normally use some form of transport.

Many, especially those from the UK, fly to other countries and in doing so release huge volumes of carbon dioxide into the atmosphere. The creation of ski runs needs vast amounts of deforestation, avalanche bombing disturbs animals trying to hibernate, artificial snow making uses up vast amounts of water and toxic ski wax left in the snow enters rivers and streams with damaging results.

So, considering the effects that we have on the mountains, how should we try to minimise our impact?

Well – there are many ways we can try to limit the negative effects.

And remember to do your best to reduce energy consumption back at home. Switchto a green energy supplier, buy energy efficient light bulbs and turn off all electrical appliances at night. This will not only help save our snow, but will also save you money.

Once you’ve done everything you can – start encouraging your friends, family and colleagues to do the same.