Home > In The Media > Movie Review of 'Frostbite' 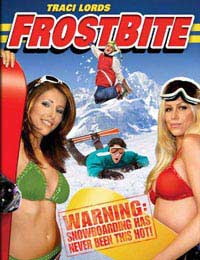 Bizarre in a Family Guy approach at times, the film employs the stereotypes of its ski party movie genre and a suitable plotline. Without taking itself seriously token hot chicks don’t try to act, sex sells coffee and the problem of segregation is not solved. Incorporating the mandatory one rarely skied deadly run and requisite rivalry race for the mountain, newcomers writers’ Paul Miller and Steve Rogers, and director Jonathan Schwartz don’t take on more than they can handle.

Cocky extreme snowboarder Billy Wagstaff, Adam Grimes, moves to Shittville to snowboard with Colonel Jaffe, Peter Jason, at the Pine Mountain Snowboard Academy. In a classic rich vs. poor rivalry, Wagstaff and hot-girl-next-door friend Casey Richards, Carmen Nicole, try to figure out who they are and where they fit in. Hysterically off the wall moments, like butt smoking and the 'keep the change' lesson unapologetically lacking subtlety. While Winter’s copy scene and Jaffe’s signs comedically develop the characters. The cast of stereotyped international snowboard heroes and local bums fill out the story line well.

Warren Miller moments transition scenes without distracting from the story, and the character’s riding is believable, not too professional though obviously not the actors (proven in the outtakes). The only bothersome storyline inconsistency is Wagstaff’s snowboarding ability while riding in jeans. A visual cue of poverty, it tries too hard.

The surprisingly blunt and honest conversations about woodies build well for the acceptable viciousness, as opposed to prankster-ness, of Colonel Jaffe. However, the time transition during Wagstaff’s internment in the trash can is disjointed. A week seems a bit long, though Billy’s emaciation is a scream, not enough happens to make the time lapse believable. And while it’s obvious that Billy needs to get expelled for the plot, the timing is not convincing…nothing especially bad happens, but by the time it comes around, you’re glad the build up is finally over!

At the end of the movie, the outtakes precede the credits, which roll with great professional boarding footage, but the outtakes aren’t as funny as the actors seem to think, breaking into laughter trying to deliver their lines. Rick Overton’s capricious lines close the outtakes well, actually producing a laugh, and making us wonder where he was the whole movie. The final scene, after the credits, with Jack Shitt Jr’s cameo incites confused laughter and maintains the creators’ intention not to tackle big issues, flagrantly congratulating themselves for not wanting to save society.

This movie does not tackle society’s ills or teach us a lesson, though Jack Shitt Jr. lectures on qualifications of useless people; it exists purely to entertain. For the most part, it succeeds, though the hour-and-half length feels more like two and a half hours and in the end, it is not quotable and thereby becomes a forgettable movie.