Home > Competing > History of Cross Country in the Olympics 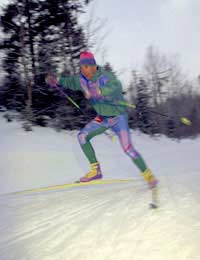 The history of Olympic cross-country skiing is as much about Norwegian patriotism as the international games. When the sport first appeared as an international competition Norwegians worried their beloved national sport would be tainted.

In 1920 Norwegian expatriates, who had spread cross-country skiing world wide, called for the creation of an International Ski Congress to rule skiing competitions. The congress officially recognised only cross-country, or Nordic, events and sponsored international ski meets every four to five winters in Sweden. Until 1924 there was always a Norwegian leading the Congress; thus Norwegian rules prevailed, including the tenet that competitors had not only to be physically fit, but also possess upright moral character.

Interest in winter sports grew internationally and some events were added to the Olympic Games held in the summer. In 1924, the International Ski Congress became the Federation Internationale de Ski or FIS. That same year, the International Olympic Committee endorsed an eleven-day “International Winter Sports Week” in Chamonix, France, the Scandinavian countries.

Norways’s dominance over cross-country skiing was not tampered by the Olympic Committee’s inclusion of fifteen other nations. In addition to the Norwegian lead FIS organisation, which continued to rule over skiing, Norwegian athlete Thorleif Haug won three gold medals for the 18km and 50km cross-country races, and the 18km/jump, Nordic combined. Jacob Thams won the other Nordic gold medal in the 90m ski jump. Not surprisingly, Norway claimed 17 medals overall, followed by Finland with 11 of the 43 medals available.

Over the years with FIS approval, Nordic events have changed and multiplied. In 1936, a 4x10km mixed relay was added to the cross-country events. The 18km race was reduced to 15km in 1952 and has been held as a classic style race since, with the exception of the 1992-1998 Games where it was replaced by the 15km combined pursuit. Appropriately the first women’s Nordic event, a 10km classical race, took place at the 1952 Winter Olympic Games in Olso, Norway.

Not until the 1988 Calgary Games, was another major change made: the Olympic Committee began designating classical and freestyle techniques for specific events. Following that decision, the combined pursuit included a 10-km classical race and a 15-km freestyle race contested on separate days until 2002, when it was shortened to two 5-kilometer races held the same day. The 30km freestyle event joined the lineup in 1956, being held as a classical event for the 1998 Games, switching with the 50km event, which was held as a freestyle event that year. The 2002 Winter Olympic Games introduced the 1.5km Sprint.

Despite Canada’s own love of cross-country skiing they did not participate in the Winter Olympics until 1928; W.B. Thompson placed 37th and Merritt Putnam placed 40th in the 18km race. Norway again dominated the podium accompanied by Sweden, though Rudolf Burkert, a Czechoslovakian, was the first non-Scandinavian to take a medal: the bronze in Ski Jumping. American, Anders Haugen won the bronze in the 1924 ski jump, but was not awarded the medal until a scoring error was corrected fifty years later, when he was 83.

Lake Placid, USA hosted the first Winter Olympic Games with electronic timing, in 1980; the same year Bulgarian Ivan Lebanov won the country’s first medal, a bronze in the 30km. Four years earlier Bill Koch won the US’s first Silver in the same event. Scandinavia has remained strong in the Nordic events, allowing only Russia and Italy repeated time on the winners’ platform in recent years. Though, Bjorn Daehlie of Norway holds not only twelve gold medals for cross-country skiing, but retired as the most successful Winter Olympian of all time.

Cross-country skiing’s twelve events are the most of any Winter Olympic sport. Still holding to the high ideals of its originators and Scandinavian born governing body, the internationally popular Olympic sport validates Norway’s pride in their historical national sport.