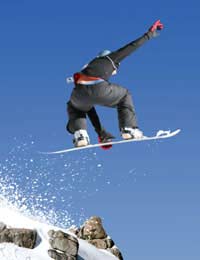 The Snowboard FIS World Cup is a series of snowboard competitions held each winter season between athletes representing teams of various National Associations which takes place in various sites around the world mainly in Europe, North America and Asia.

Currently, there are five disciplines of snowboarding included: big air, half pipe, parallel giant slalom and snowboard cross. The competitions are held throughout the season, with points being totaled and winners announced at the end of each winter.

Although in many sports The World Cup is the pinnacle of competition level, in snowboarding there are a number of highly respected competitions and there is much controversy surrounding The World Cup.

The reason for this is that the World Cup is governed by the FIS (Fédération Internationale de Ski), but many snowboarders think that it should be governed exclusively by the snowboard committee.

The now defunct ISF (International Snowboarding Federation) was regarded as being the true voice of snowboarders, having been founded in the early ‘90s, but the FIS was granted jurisdiction over snowboarding by the International Olympic Committee, after it was announced that snowboarding would debut in the ’98 Nagano winter Olympics. The ISF later collapsed and was replaced by the World Snowboard Federation (WSF).

With the traditional friction between the two sports (snowboarding was originally banned in almost all ski resorts), many snowboarders were not at all happy with the idea of having their sport being seen in the Olympic arena as just a subset of skiing. They believed that snowboarding deserved its own governing body and should be recognised as a sport in its own right.

For this reason, one of the most talented, famous and influential pro-snowboarders of all time, Terje Haakonsen famously boycotted the ‘98 winter Olympics and has declared that he will never attend in future. He went on to found his own competition circuit in 1999, the highly respected Arctic Challenge, held in his home country of Norway every year.

Within the snowboarding community this is one of the most prestigious events as many feel that it embodies the true ethos of snowboarding, whilst at the same time pushing the sport to new levels of competition. This is especially true because it is run by such a highly respected snowboarder.

Snowboarders can win a place to the event by collecting points in the various Ticket to Ride (TTR) competitions held throughout the year. The disciplines are quarter pipe, half pipe and slope style. Winners of the Artic Challenge may be offered an invite to the ride with the legend himself in a freeride competition held in Norway’s untamed Artic Circle.

Though the FIS still controls world cup competitions and the Olympics, time seems to have healed some of the grievances, and now most pro-snowboarders are happy to compete under FIS events as well as the various other competitions held around the world.

However, the WSF and their competition circuits are generally held in higher regard than those of the FIS, as the WSF is seen to support the sport and aid it to grow in the right way, with regard to promoting the worldwide development of snowboarding as a sport in its own right, and not just a subset of skiing.