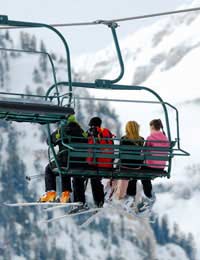 Ever since snowboarding appeared on ski slopes there has been friction between the two sports. Originally snowboarding was outlawed from almost every resort across the globe and renegade riders were banished to the backcountry where a hardcore few continued to develop their skills and cultivate the sport away from the limelight of the world’s groomed pistes.

It wasn’t until 1977, that a man named Dimitrije of Salt Lake City, (founder of the snowboard company Winterstick), achieved in getting snowboards covered under ski liability insurance, that snowboarding began to become more widely accepted by ski resorts, and this led to a surge in popularity.

But the boarding boom of the 1980s brought a very different type of personality to the slopes; droves of teenage skate punks with an accompanying ‘bad ass’ attitude that the average skier didn’t appreciate.

This new form of snow sport brought the lawlessness of street skating to the arena of strict slope etiquette. Kids who never previously had any interest in what they saw as an upper class and snobby hobby, were now being attracted to the slopes and becoming obsessed, as snowboarding exploded across North America and Europe.

And so the war began; on one side, the traditionally upper class, rich kid skiers, who wanted the slopes free of these rude, dangerous, disrespectful hoodlums with their baggy trousers and “trash and thrash” attitude. On the other, a rapidly growing army of young, enthusiastic new snowboarders, scornful of skiing’s conservative yuppie style, pumped full of teenage angst and revelling in the sport’s rebellious image.

Fuelled by propaganda in the snow sports media on both sides of the trenches, it seemed that an essential trait of a skier or snowboarder was to berate the other. For boarders, it was seen as fashionable and a core part of your identify to mock skiers at every opportunity, with one piece ski wear being a favourite target. Skiers were equally guilty, believing that they had more right to the slopes, claiming that boarders didn’t follow the laws of the piste, scraped off all the best snow, and were a danger to others.

Some resorts proclaimed snowboarding nothing more than a passing fad. Not wanting to lose custom from their regular skiers, they denied access to boarders, believing interest would soon wane and that snowboards would end up gathering dust alongside mono-skis and other such relics of the past that now hang in winter sports museums or decorate alpine bars.

Other more foresight resorts realised that snowboarding was here to stay and could be a much needed financial saviour in the waning world of skiing. They started promoting their grounds to snowboarders, creating special areas where snowboarders could perform their jumps and slide their rails without creating friction with skiers.

These resorts were soon attracting more customers to their slopes than ever before, reaping the financial rewards, and other ski areas slowly began to follow suit. In the early eighties less than 10% of US resorts permitted access to boarders, nowadays, few exclude it.

The two sports, which originally brought together two very different types of fashion, style, attitude and personality to the same arena, have now blurred their boundaries to a large extent. What was once thought of as nothing more than a passing fad has dug its edge deep into the pistes of the world, from Austria to Australia, and the terrain park and half pipe, once thought of as exclusive snowboard territory, has now become home to skiers too.

And so the feud is fading. As the older generation hang up their poles, the new generation of skiers and boarders are enjoying the same terrain on the same mountains. The skiers are on their twin tips in the park, going big alongside boarders, and with the aid of fat powder skis, both are riding shoulder to shoulder in the backcountry.

In reality, the war was never really about snowboards and skis, it had more to do with a clash of classes, an older generation fearing the changes brought about by the younger generation, and that younger generation rebelling - a scenario that repeats itself in many facets of our culture.

Indeed, even within the world of snowboarding itself there are factions; the hard boot carvers vs. the rail jibbers, the backcountry powder hounds vs. the corduroy shredders. Will today’s park rats be complaining about tomorrow’s snow bikers in years to come?

The bottom line is, young skiers and snowboarders today don’t care whether you ride one plank or two. Though the media likes to present the idea of an ongoing feud, in reality – the image is long outdated and conflicts between the two parties are becoming increasingly rarer.